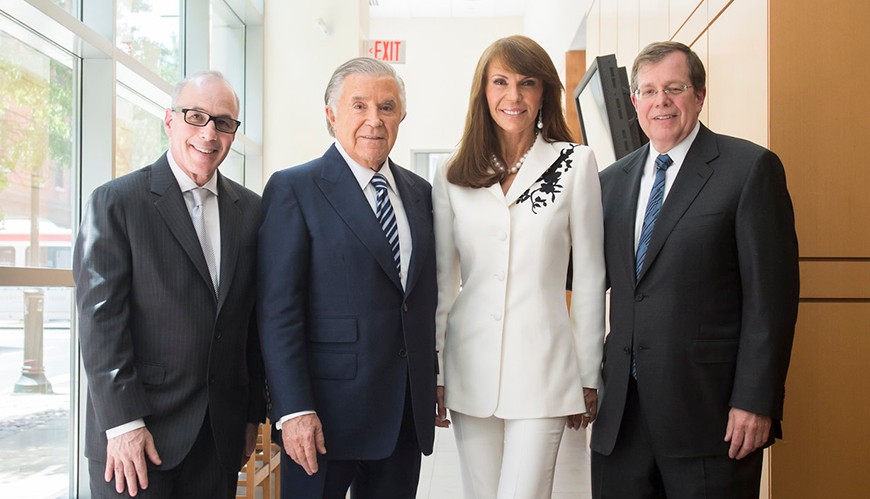 “On behalf of the entire Jefferson community, I am honored that the Sidney Kimmel Foundation chose to bestow its overwhelming generosity on Jefferson Medical College,” said Stephen K. Klasko, M.D., M.B.A., President and CEO, Thomas Jefferson University and TJUH System.  “This transformative gift will redefine and shape the future of healthcare education at the Sidney Kimmel Medical College for many years to come.  The vision and philanthropic leadership of Sidney and Caroline Kimmel will continue to attract the nation’s finest students who seek out Jefferson for its academic excellence. This gift not only benefits the Jefferson community but our entire city.”

“My heart has always been in Philadelphia and Jefferson is the soul of this city,” said Philadelphia native and philanthropist Sidney Kimmel. “Caroline and I are delighted to support the education and training of future young men and women who will dedicate their lives to the art and science of medicine.  We are confident the years they spend at Jefferson will have a lasting impact on the health and wellbeing of countless lives throughout Philadelphia and the nation.”

Sidney Kimmel was born and raised in Philadelphia, and his philanthropy reflects a deep devotion to his hometown.  He is the lead donor to the Kimmel Center for the Performing Arts as well as the National Museum of American Jewish History, and he funded construction of the Kimmel Theater at the National Constitution Center.  He was founder and chairman of Jones Apparel Group, one of the world’s leading designers and marketers of branded apparel, footwear and accessories.  Since 1993, the Sidney Kimmel Foundation and its subsidiary, the Sidney Kimmel Foundation for Cancer Research, have committed more than $750 million to philanthropic causes.  Nearly three-quarters of these gifts have benefited advanced cancer research through the establishment of cancer centers, including Jefferson’s Kimmel Cancer Center.

“Jefferson has benefited enormously from Sidney’s generosity through his unwavering support for cancer research and cardiac care,” commented Richard Gozon, Chairman of the Board of Trustees at Thomas Jefferson University.  “This extraordinary gift is a defining moment for Jefferson and demonstrates his trust in our ability to be a leader in shaping the future of healthcare.”

“The medical students who train at Jefferson know they will receive an unparalleled experience and a degree that sets them apart from their peers,” said Mark Tykocinski, M.D., The Anthony F. and Gertrude DePalma Dean of Jefferson Medical College.  “This magnanimous gift will enable our faculty to provide training, investigative and clinical care environments that will ensure greater successes among our students for decades to come.”

Founded in 1824, the Sidney Kimmel Medical College has awarded more than 30,000 medical degrees and has more living graduates than any other medical school in the nation. It offers both undergraduate medical education programs and innovative joint degree programs to more than 1,000 students each year.  Recognized for its balanced and interprofessional approach to medical education, approximately one out of four medical school applicants in the United States applies to Jefferson.