Alumnus Says the Practice of Medicine Is More Than Skin Deep 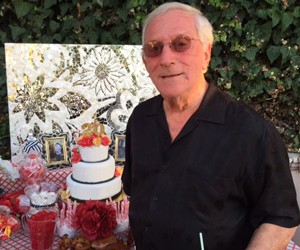 When Marvin Rapaport, MD ’62 was a young boy living in North Philadelphia, his family doctor, Dr. Roth, was a kindly, soft spoken, caring physician. He often made house calls when the need arose due to contagious childhood illnesses and high temperatures.

“I was quite impressed with his manner, his calmness, his ability to allay fears, especially in my mother,” recalls Rapaport. “And whatever he did cured the illness. I thought, ‘I want to be like this man. That would be very special.’”

And so he did. Education in earnest began at Central High School in Philadelphia, where he was class president in the senior year. He was a biology major at Penn and then matriculated into medical school at Jefferson.

“I was studying long hours for fear of not knowing the answer if called upon,” he says of his preclinical years. “I loved every minute of it. It created confidence in caring for patients later on.”

He remembers Jefferson’s faculty as being “old-school professorial,” deeply caring for patients. One of his favorite teachers was a cardiologist who, after 30 minutes of questioning a patient with chest pain, knew the exact diagnosis, covering all possible reasons for the pain—cardiac, musculoskeletal, pulmonary, or gastrointestinal—via the history and the physical exam. Testing was ordered only if these were inconclusive.

Hospital rounds with the professors took place at the bedside for lengthy times to get answers and offer supportive care. “Doctor-patient contact is essential to worthwhile care,” Rapaport says. “I was quite impressed, and this approach to medical care is how I pursued my practice career.”

At Jefferson, Rapaport was interested in gastroenterology, but in 1963, six months after being drafted into the Army and posted at the largest “evacuation” hospital in Korea, the dermatologist there was about to rotate out with no replacement. At that time, Rapaport was in charge of two internal medicine wards. The unit colonel summoned him and said, “You will also be the dermatologist and head that inpatient service.”

Rapaport was “totally amazed and fascinated” by the intense, one-week dermatology refresher course given by the departing dermatologist. There was an endless variety of medical puzzles consisting of infections, venereal problems, tumors, allergic rashes, and signs of internal associations, not to mention a plentiful amount of psychology. “You listened, you examined, and you invariably made the diagnosis then and there,” says Rapaport, remembering his epiphany, “just as I had learned at Jefferson.”

Upon Army discharge, he immediately began a dermatology residency at UCLA Medical Center in 1966 and then opened a private practice in Beverly Hills. He also headed the Allergy-Contact Dermatology Clinic at UCLA.

The private practice consisted of medical dermatology. The UCLA clinic patients were undiagnosed or unusual cases of dermatitis, photodermatitis problems, or bizarre rashes. In his private practice, Rapaport saw patients daily, grew the practice, and entered strongly into the wider medical community. He became Chief of Dermatology at Cedars-Sinai Medical Center after years of teaching in the clinic, and he participated in the committees of various local medical groups. The gamut of medical problems he treated was just as he was awakened to in that refresher course.

The UCLA practice grew to include teaching residents and medical students, and treating an increasing patient population of referred undiagnosed rashes. These “bizarre rashes” resembled each other, and Rapaport thought he found the answer for so many distraught patients who suffered for months or years.

After conducting detailed physical examinations and in-depth histories coupled with appropriate tests, Rapaport concluded the problem was iatrogenic. The rashes, he argued, were caused by prescribed topical steroids. Patients became addicted to the treatments, he insisted, and required increasingly higher dosages to hold the symptoms at bay.

Rapaport lectured on the subject at dermatologic meetings, published papers in peer-reviewed dermatology journals, and dedicated his practice to helping patients with the condition, more than 4,000 cases. Patients from around the world have commented on his Facebook page, which reads like a scroll of grateful patients.

As his daughter, Vicki Rapaport, MD ’98 has stepped forward to head their dermatology practice and skincare company, SKN Beverly Hills, Rapaport has turned more attention back to his alma mater. His philanthropic support to Sidney Kimmel Medical College has gone to the Second Look program, which brings accepted applicants to campus for a closer look at Jefferson. He is also turning his attention to humanities programs and the dermatology department to find ways to, as he puts it, “be a little more involved.” He is now taking his own second look.

Rapaport has been hosting dinners in Los Angeles during holiday breaks for SKMC students in California, “discussing medicine, offering advice, and probing new and old ideas about the profession.” The students, he finds, are not just brilliant scientists, they are amiable, kind, and invariably excited to be doctors. “They will do well,” he says.