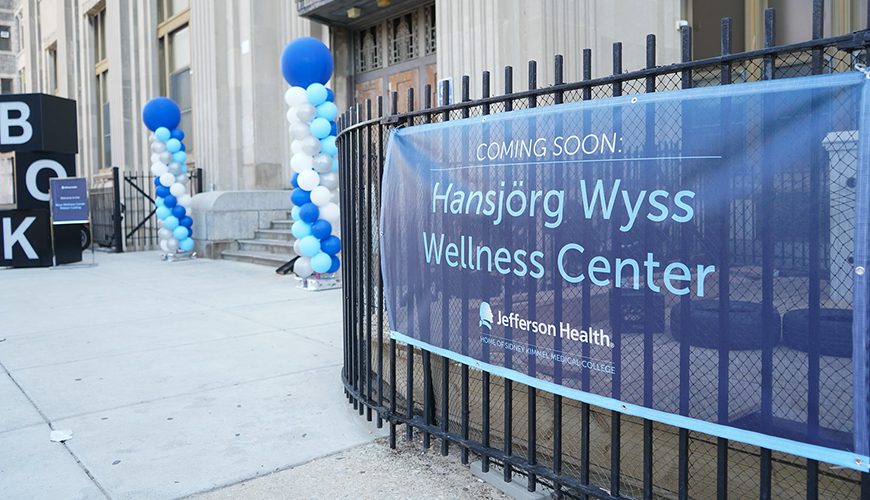 The forthcoming clinic will deliver compassionate and culturally competent care to improve the lives of community residents.

Jefferson and the Philadelphia Collaborative for Health Equity (P-CHE) announced a $3.1 million gift from the Wyss Foundation to establish a new community wellness center in South Philadelphia’s Bok Building dedicated to serving the area’s significant immigrant and refugee population. The Hansjörg Wyss Wellness Center will become the hub of Jefferson’s clinical and educational outreach activities for the city’s southern neighborhoods, bringing primary care and social services to the members of the community, regardless of health insurance or citizenship status. The Wyss Foundation, other benefactors and Jefferson leaders gathered for a ceremonious ribbon cutting for the forthcoming center, which is expected to open in early 2020 on Bok’s first floor, pending construction and related regulatory approvals.

“Through the generosity of the Wyss Foundation, this center will help to reduce disparities in health care for immigrants and refugees,” said Stephen K. Klasko, MD, MBA, President of Thomas Jefferson University and CEO of Jefferson Health. “It's inhumane to think of anyone struggling to find care in a city that’s home to some of the nation’s best healthcare resources.”

The center will also be a first in South Philadelphia, which currently lacks any permanent healthcare services dedicated to the immigrant and refugee communities. Jefferson is one of the largest providers in Philadelphia for refugee health care and a significant portion of its immigrant community. Many enter the healthcare system through the Emergency Department for non-emergent medical issues. Last year, 14% of discharges from Jefferson’s Methodist Hospital Emergency Department in South Philadelphia were uninsured and nearly 23% were immigrants.

“Health care is hard to navigate even when you do speak English,” said Dr. Marc Altshuler, an associate professor and physician of family and community medicine at Jefferson and clinical leader of the Hansjörg Wyss Wellness Center. “Immigrants and refugees are facing unprecedented challenges today, and receiving health care shouldn’t be another barrier to overcome. This wellness center will be a place to see a doctor and a safe space to receive culturally competent care and feel a part of the community.”

Dr. Altshuler’s passion for aiding the medically underserved began in the late 1990s with his involvement in JeffHOPE, a student-run group that helps provide services to the homeless at free clinics. In 2007, he launched and is now Director of the Jefferson Center for Refugee Health, the largest medical provider of refugee health care in Philadelphia. He is a founding member of the Philadelphia Refugee Health Collaborative, a partnership established in 2010 among the city’s academic medical centers and refugee resettlement agencies that offers medical assistance to newly arrived refugees.

Today, Jefferson is one of only four programs in the nation recognized by the Centers for Disease Control and Prevention as a Center of Excellence in Refugee Healthcare. The Wyss Wellness Center will offer invaluable training for students of the Sidney Kimmel Medical College, in addition to becoming a satellite-training site for the Department of Family and Community residents and other interested residents on providing culturally competent care.

The immigrant community surrounding the multiuse Bok Building, at the corner of Ninth and Mifflin streets, is largely of Southeast Asian descent. In addition to medical care, future clients of the center will have access to social, educational and mental health services provided through the Southeast Asian Mutual Assistance Associations Coalition (SEAMAAC), which has been serving refugees, immigrants and asylees for over 35 years.

“In a neighborhood that has faced divestment of public resources for more than four decades, the opening of Wyss Wellness Center could not have come at a better time,” said Thoai Nguyen, CEO of SEAMAAC, Inc. “SEAMAAC is honored to continue our long-time partnership with Jefferson in addressing the unmet needs of immigrants in Southeast Philadelphia.”

The wellness center is another initiative driven by the newly formed Philadelphia Collaborative for Health Equity. This ambitious program leverages the power of collective impact to address health disparities head on by bringing together stakeholders throughout the city to identify the social and economic factors affecting community health and creating solutions to overcome them. Last month, under the leadership of Executive Director Dr. Jack Ludmir, Jefferson and P-CHE announced they are awarding more than $500,000 in grants to organizations focused on closing the health disparity gap in North Philadelphia based on the findings of a first-of-its-kind community health needs assessment of North Philadelphia’s Latino community.

The Wyss Foundation is rooted in discovery and innovation, which echo the values of Jefferson. “Much of our philanthropy supports projects in areas from the environment to education to economic opportunity to social justice,” said founder Hansjörg Wyss. “We are pleased to be able to support the excellent work being done by Dr. Marc Altshuler and his colleagues.”