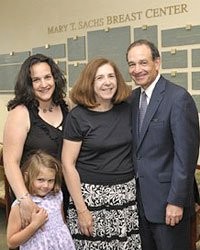 Some 50 years ago a young mother died of cancer at the age of 44, leaving behind a husband and two young sons.

Two decades ago one of those sons began making significant charitable gifts to support Abington Memorial Hospital. In 1992, in appreciation for the son’s generosity, the hospital named its breast-imaging center in his mother’s memory. And this year, on June 17, the hospital held a special ribbon-cutting to celebrate a major expansion and renovation of that facility – the Mary T. Sachs Breast Center.

Herb Sachs was six years old and living in Chicago when his mother became sick with Hodgkin’s disease. She died in 1959 when Herb was just 10. Two years later he moved with his father and brother to Philadelphia, where his father relocated his family-owned glass bottle manufacturing business. When their father passed away in 1968, Herb and his brother, Keith, inherited the business.

“My father had it all worked out for us!” says Herb with a laugh. “He said, ‘Herb, you’ll do this, and Keith, you’ll do that.’ It was very important to him that we take over his business, which has turned out very well for us.”

It certainly has. The brothers have grown and developed the business into what is today Saxco International, a world-wide packaging specialist for the wine and spirits industry.

At the heart of his father’s vision for his two sons was that they would continue to run the business as partners. “Over all these years,” says Herb, “Keith and I have remained very close. It’s not just that we’ve worked together all of our lives. We both went to the University of Pennsylvania. We both met our future wives there. And we both still live just one block from each other.”

In 1969 Herb married his Penn sweetheart, Alice. They had three children. “When our youngest was about nine,” Herb recalls, “he had a serious bicycle accident. We took him to Abington’s emergency room, and he received excellent care there. That started me thinking.”

Two big realizations came from that experience. One was that Herb wanted to support in some significant way the hospital and its service to the community. The other was that he wanted to do something to honor his mother’s memory.  Says Herb, “My mother died at such a young age, I wanted her name to live on.”

He discussed various ideas with Janice Bers, a good friend who was both a long-time supporter of the hospital and a prominent volunteer leader there. His conversations with Janice led to a series of discussions with the hospital’s leadership to explore ideas for giving. Herb’s interest began to focus on the intriguing plans that were being developed for a new breast-imaging center at Abington Memorial Hospital. This, he realized, could be a fitting tribute to his mother.

The Sachs’ involvement with Abington Hospital has combined charitable giving with volunteer leadership. Herb served for several years as a trustee on the hospital’s Foundation Board, and Alice recently served as honorary chair of the “Power of Women” campaign to expand the Mary T. Sachs Breast Center. The couple also led by example when they made a major pledge of support toward the Breast Center expansion.

“Abington Hospital is such an important place,” he says, “and the Breast Center is an extraordinary resource. Alice and I both feel very good about the involvement we’ve had with the Center and with this hospital.”