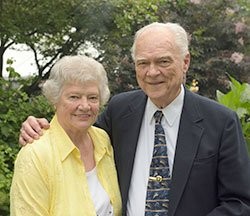 John and Mildred Barr were savvy about computers before the rest of us had even seen one.

In 1945 Philadelphia became the birthplace of the modern computer when the ENIAC – a room-sized machine of vacuum tubes, resistors, and capacitors – debuted at the University of Pennsylvania. In time, Philadelphia-area colleges began looking for people to teach computer programming. They turned to IBM, where John was working as an early programmer.

That led John to a dual career as a programmer and a teacher of computer programming. For 25 years he worked with major companies that included Burlington Industries, Curtis Publishing, Univac, IBM, and Penn Central.

Then, in the late seventies John and Mildred started their own company. Called Ficomp, Inc., it provided a range of services to computer and communications companies throughout the Northeast. Ficomp grew into a highly successful family-run business, which in 2005 was sold to one of North America’s leading information technology providers.

The success of their company enabled the Barrs to become significant philanthropists.

“We’ve been very fortunate,” says John, “and we try to give back wherever we can.”

One of the places they’ve given back to is Abington Hospital. For more than a quarter-century the Barrs have been generous donors to Abington. They’ve made significant annual gifts in support of the Heart Failure Program and other services. They’ve supported their physicians for National Doctor’s Day. And they’ve established two charitable gift annuities to support the hospital’s Hybrid Operating Room.

In 2007 John had heart bypass surgery at Abington, which further motivated his philanthropy.

“I had wonderful care,” he recalls. “Dr. Watson scheduled me for the surgery and Dr. Addonizio did the operation. I am very grateful to them and everyone who cared for me. That care made me want to do even more for the hospital.”

“Abington is our local hospital,” stresses Mildred. “It’s where we and our children have gone for our care, and we’ve been very impressed over the years. We are fortunate in our lives, and Abington is doing a lot of good things, so it is natural that we want to help.”

In addition to John’s heart care, the Barr family has had a history of cancer. So when Abington launched its campaign to build the new Asplundh Cancer Pavilion, John and Mildred took note.

“We followed the construction with a lot of interest,” says Mildred of the new facility, which is the home of the Sidney Kimmel Cancer Center at Abington – Jefferson Health. “When the center opened and they had an open house, we went and toured the whole facility.”

“We were very impressed,” says John. “With the combination of Abington and Jefferson together, I think they’ve got the best service in the area. Not just for cancer, but for all health areas.”

“Abington is doing a lot of good things in lots of areas,” agrees Mildred. “But we’re particularly dedicating our support to heart and cancer. Both of those things have touched our family, and we feel a personal relationship to that.”

Since the early days of computers, the Barrs have had a knack for affiliating with quality. For John it’s quite simple: “Abington is one of the best programs out there, and they’re doing a lot of good for a lot of people. That’s why it’s important to us to give back however we can.”