Michael Nissman ’64 has been supporting Jefferson ever since he had “a couple extra dollars” to spare. Today he’s the donor behind numerous big gifts, including the Ruth and Morris Nissman Scholarship and a new endowment for the Ramily Market. 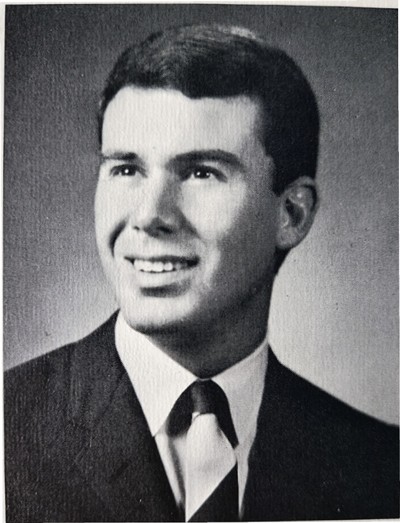 When Michael Nissman ’64 launched his textile business in 1976, he just wanted to pay the rent while trying to make it as an actor in Los Angeles. But more than 50 years later, his M & N Company is still going strong—and in fact, its success is the reason he’s been able to support Jefferson over the years.

“Life is not about going after money,” he says. “Never ever did I want to make a lot of money. When I started my

career I just wanted to make a living. Having a lot of money was not a goal, but helping others was a desire. I did this by participating in marches and by supporting causes that were important to me.”

But once he had a little extra, he donated some of it to Jefferson. As his business grew, so did his support. Today he’s the donor behind the Ruth and Morris Nissman Scholarship and a new endowment for the Ramily Market, among numerous other gifts to the university.

“I try to promote the idea that we’re all brothers and sisters,” Nissman says. “When you can help others, you do. That is the focus of my life: helping others.”

His philosophy isn’t tied to any religious beliefs, but rather a result of his dad, Morris’s, example. Growing up in North Philly in the 1950s, Nissman heard his father, an immigrant from Belarus, talk about traveling to the South for his textile work. Morris didn’t drive, so he brought along a driver who was Black. When local motels told Morris that his driver couldn’t sleep there, Morris slept in the car with him. When restaurants wouldn’t let his driver inside, Morris took his food to go and they had a picnic.

“He just knew it was the right thing to do,” Nissman says. “Obviously that was a powerful example and had a deep effect on how I wanted to live my own life.”

After a “joyful” four years as a textile design and textiles and materials technology major at Textile (now Jefferson)—“where I was an average student at best,” Nissman says—he went to law school and became an attorney for the American Civil Liberties Union in the early 1970s. He’d already been joining peace marches, including the historic Poor People’s March to D.C. in 1968. Nissman became immersed in a world he knew he would be involved with the rest of his life.

Nissman believes cross-fertilization of ideas and cultures is extremely important as it builds empathy. He points to a Native American aphorism: Do not criticize another until you walk a mile in their moccasins. Thus, Nissman says, “A life that is well lived, is a life that most definitely is involved with others.”

That’s part of why he supports Jefferson, a vibrant cross-disciplinary community in which students are always exploring new passions and feeling out possible career paths. In 2003, with M & N Company, a deeply established and successful business, he created the Ruth and Morris Nissman Scholarship, named after his parents. (Nissman says he specifically avoids naming things after himself.) Awarded to incoming freshmen of any major who “demonstrate creativity and empathy for others,” it’s now one of the largest scholarships that benefit undergraduate students.

Last fall, he committed a large sum from his estate to support undergraduate programs at the university. He also made a donation that will endow the Ramily Market—a food pantry for Jefferson students who are struggling with food insecurity. Nissman’s gift will provide a dedicated funding source for the market, allowing staff to plan ahead and buy what the pantry needs, rather than relying exclusively on donations.

“How would you like to wake up in the morning and not have food?” Nissman says of his decision to endow the Ramily Market. “How can you allow a fellow brother or sister to go without food if you can help them? If you can share, you must do that—you must.”

“When I can help somebody, that gives me the greatest joy,” Nissman says. “That’s what life is all about. We put our arms around one another and we get through this thing together. And if somebody falls or trips, you don’t continue without helping that person. You stop, you pick them up, and then you continue.”

To ensure student well-being and academic success, JeffSecure was established to provide financial support to students with unexpected, unforeseen, and unavoidable emergency expenses that arise, such as food insecurity, travel during a family crisis, safe housing, and more.