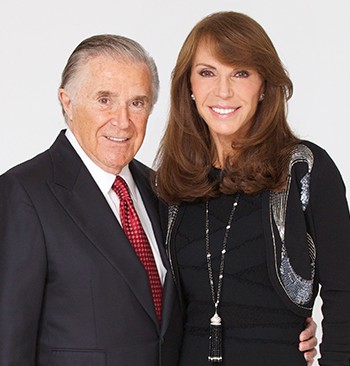 PHILADELPHIA — Thomas Jefferson University has received a $70 million gift from Sidney and Caroline Kimmel, which will significantly advance research at Jefferson. The Caroline Kimmel Biomedical Research Building will be a home for big ideas, providing Jefferson scientists with leading-edge technology and laboratories.

”This gift will have a profound and lasting impact on Jefferson’s ability to further pursue scientific discovery,” said Mark Tykocinski MD, Provost and Executive Vice President for Academic Affairs and the Anthony F. and Gertrude M. DePalma Dean, Sidney Kimmel Medical College at Thomas Jefferson University.  ”The Caroline Kimmel Biomedical Research Building will serve as a magnet for scientific talent and will bolster our status as an R2 National Research University.”

Research is a cornerstone of the University and Jefferson’s Reimagine $1 billion campaign. Focused on four key themes, the campaign aims to support talented faculty and students, create spaces that heal and inspire, unite communities for health equity, and fuel discoveries that will improve lives. This landmark gift will round out Jefferson’s distinctive integrative approach to research that includes programmatic basic science, clinical and applied.

The new facility will markedly expand Jefferson’s research capacity and, along with the Bluemle Life Sciences Building and Jefferson Alumni Hall, will create a ”research corridor” along Locust Street. Being physically connected with Bluemle will foster connections with researchers in the Sidney Kimmel Cancer Center, where Mrs. Kimmel serves as a member of the Advisory Council, and the larger Jefferson research community.

Mr. and Mrs. Kimmel are noted philanthropists, supporting medicine and the arts for many years in his native Philadelphia. Mr. Kimmel’s first job in the garment industry was as an inventory clerk and later a traveling salesman for a women’s wear manufacturer. From there, he joined the iconic clothing company The Villager, rising through the ranks to become its president and CEO. In 1970, Mr. Kimmel established his own clothing line, Jones New York, and during the 70s and 80s became one of the major players in the women’s apparel industry. Jones went public in 1991, adding many notable brands to its line including Anne Klein, Nine West, Gloria Vanderbilt, and Stuart Weitzman. Mr. Kimmel served as CEO until 2003 and as chairman until 2014, when The Jones Group was sold for $2.2 billion.

This year, 2019, also marks Mr. and Mrs. Kimmel’s 20th wedding anniversary. They were married in 1999 and reside in Southern California just miles from where Mrs. Kimmel was raised. Together, they have continued the many philanthropic endeavors to which Mr. Kimmel committed after taking Jones public.

“I could not be more pleased about this gift; in fact, I am ecstatic,” said Sidney Kimmel. “In one act, I have been able to honor my wonderful marriage to Caroline, my home town of Philadelphia, Thomas Jefferson University which I call the Soul of the City, and cancer research to which I have devoted so much of my time and resources.  What more could I ask for?  I am so fortunate, frankly blessed, to have this opportunity.”

“Sidney has proven once again that he's an incredible humanitarian and philanthropist,” said Caroline Kimmel. “But where he really shines, is as a husband!  I'm profoundly grateful to have my name and our 20th anniversary celebrated in such a meaningful way at Jefferson. This moment forever links our personal commitment to cancer research, our legacy and our abiding love. I couldn't be happier!”

Mr. and Mrs. Kimmel have been extremely generous benefactors to Jefferson, having given more than $200 million over the years including: providing cornerstone funding to establish the Sidney Kimmel Cancer Center in 1995, as well as transformational support for research into the prevention of cardiovascular disease, and Jefferson’s largest-ever gift of $110 million to name the Sidney Kimmel Medical College at Thomas Jefferson University in 2014.

“Caroline and Sidney Kimmel have always been able to see the future and to make it more optimistic for everyone,” said Stephen K. Klasko, MD, MBA, President of Thomas Jefferson University and CEO of Jefferson Health.  “This gift is more than transformative for Jefferson and for cancer research in Philadelphia and beyond.  It further embeds Caroline and Sidney’s hearts in Philadelphia and as Sidney said, ‘Jefferson is the soul of Philadelphia.’  It is especially gratifying to me that this will be called the Caroline Kimmel Biomedical Research Building as Mrs. Kimmel has served as an invaluable leader on the Sidney Kimmel Cancer Center Advisory Council.”

Thomas Jefferson University is a leader in interdisciplinary, professional education. Jefferson, home of the Sidney Kimmel Medical College and the Kanbar College of Design, Engineering and Commerce, is a preeminent university delivering high-impact education in 160 undergraduate and graduate programs to 8,400  students in architecture, business, design, engineering, fashion and textiles,  health, science and , social science. The new Jefferson is re-defining the higher education value proposition with an approach that is collaborative and active; increasingly global; integrated with industry; focused on research across disciplines to foster innovation and discovery; and technology-enhanced. Student-athletes compete as the Jefferson Rams in the NCAA Division II Central Atlantic Collegiate Conference.