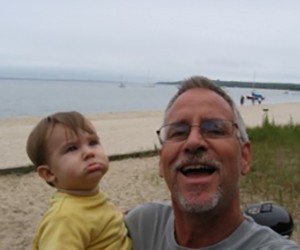 “I’m only 30,” thought Branch McQueen as he awoke one day with what felt like the weight of a gorilla sitting on his chest. Each breath—the pain, the pressure—was harder than the last. But as a father of two, Branch didn’t have time to dwell on it. The daily grind—school, work, and errands—was on his mind. So, Branch got out of bed and started his day. “I’m only 30,” he thought again.

Then the pain intensified. Finally, when it became unbearable, Branch drove himself to a local hospital. He was quickly surrounded by a group of doctors and nurses who rushed him to an examination room. Branch had had a heart attack.

He was airlifted to Jefferson, where he received seven stents. It was the start of a 30-year journey to better health and a longer life. He was diagnosed with familial hypercholesterolemia, an often overlooked genetic disorder that affects his entire family.

With the help of his Jefferson care team, led by Dr. Howard Weitz, Branch began a special drug regimen that has changed his and his family’s lives. “With Jefferson’s help, I never felt like I was at the end of a losing battle,” says Branch. “My care team knows the ins and outs of this disease; most cardiologists don’t. Each and every doctor here listens.”

Today, Branch has four children and four grandchildren, and he feels better than ever. He has continued to receive care from Jefferson every year. “When I had my first heart attack, my two youngest weren’t even born yet,” says Branch. “For me, Jefferson has been a godsend. Because of the care I received here, there will be more generations of my family to come.”