Still Bowling a Perfect Game, Thanks to Brachytherapy 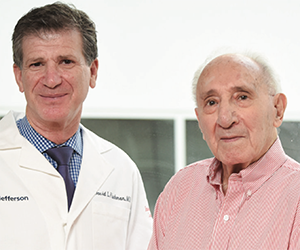 Frank Lepore, 89, has always lived his life with gusto. As an outstanding high school baseball player, he earned a tryout with the legendary Brooklyn Dodgers. Today, he’s a championship bowler who maintains an average of more than 190 and has several perfect games to his credit.

Frank has another, unique credit. In March 2002, the brachytherapy procedure he underwent at the Jefferson Angioplasty Center for treatment of restenosis in his right coronary artery was shown live on the Internet.

“At the time,” recalls David L. Fischman, MD, Director of Jefferson’s Interventional Cardiology Fellowship Program, “coronary brachytherapy was a relatively new therapy for patients who returned to their doctors with scar tissue within previously implanted bare-metal stents. In November 1994, and again in February 1997, I implanted stents in Frank’s right coronary artery. Within a couple of years following each of those implantations, restenosis occurred. When I detected it the second time, I recommended coronary brachytherapy.

“Although our interdisciplinary team at the Jefferson Angioplasty Center had often and successfully performed brachytherapy, it was still a very new treatment at that time and offered at only a limited number of medical centers nation-wide,” explains Dr. Fischman. “We wanted to teach other medical professionals about it, and raise the public’s awareness of this non-invasive treatment option for patients with restenosis. Frank didn’t hesitate in agreeing to let us webcast the procedure.”

Coronary brachytherapy, also known as intravascular brachytherapy, is a complex procedure requiring experienced interventional cardiologists and radiation oncologists to deliver short bursts—generally, of around four minutes—of betaradiation via a temporary intracoronary catheter, the Beta-Cath™ 3.5F System, to reduce scarring after repeat angioplasty. The goal is to limit growth of scar-like plaque during healing—just as it has for Frank during the more than 15 years since he had coronary brachytherapy at Jefferson.

Jefferson was among the first in the world to perform coronary brachytherapy and was a participating center and the national core angiography laboratory for the Beta-Cath trial and a principal center in the pivotal START trial, which led to FDA approval of the Beta-Cath device.

Following the introduction of drug-eluting stents over a decade ago, coronary brachytherapy was unavailable for many years. However, with the growing recognition that some patients experience recurrent restenosis, the technology was reintroduced and is available at a small number of hospitals nationwide, including Jefferson—now the only hospital in the tristate area performing the procedure.

“Today, the incidence of restenosis is low compared to what it was 15 years ago because drug-eluting stents are much better than the bare-metal ones,” says Dr. Fischman. “But drug-eluting stents do fail a small number of patients. For those patients, we may implant alternative stents containing different drugs, which may be more effective. But if those fail as well, we will consider brachytherapy. We have a highly skilled interdisciplinary team, which is crucial for successful brachytherapy.”

While the incidence of restenosis is lower in the era of drug-eluting stents, Dr. Fischman believes the cases are more excessive because of diffuse disease. Having had at least two different types of drug- eluting stents implanted—and perhaps metal stents before that—creates “mix-related issues,” resulting in a complex anatomical formation of scarring for the radiation to cure. Nevertheless, brachytherapy remains highly effective.

“For patients who have failed stenting procedures, coronary brachytherapy is available once again,” concludes Dr. Fischman. We’ve had big successes with it. Frank is a case in point.”

Like Timex watches used to be described in advertisements, Frank periodically “takes a licking and keeps on ticking.” In fact, he’s taken more than his share of licks. As an infant, he had scarlet fever and wasn’t expected to survive. He broke his nose on four separate occasions. He once fractured his skull and experienced some hearing loss from an explosion at the gas company where he worked for 40 years.

None of those could keep Frank down for long. Nor could myocardial infarction or restenosis. Fifteen years later, with his 90th birthday fast approaching, Frank is healthy and still a champion bowler—thanks to brachytherapy.

“Dr. Fischman becoming my heart doctor has been a godsend,” says a healthy and happy Frank. “I still see him every six months for a checkup. I’ve had great treatment at Jefferson. I believe that other institutions can learn from them.”