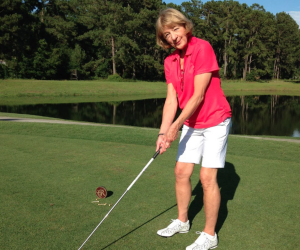 Joyce Leach, from Clifford Township, PA, survived the fastest-growing human tumor, Burkitt lymphoma, as a child. Surgery and over 100 radiation treatments saved her life but left her heart damaged. Throughout her full life, traveling the globe with her family, she maintained contact with her local cardiologist, Thomas Dzwonczyk, MD, to keep an eye on the damage.

Finally, in 2011, her heart started to show symptoms from the treatments decades before. She experienced episodes of atrial fibrillation in 2011 and by 2013, Joyce started to feel the effects. She was short of breath and extremely tired.

“I felt progressively worse,” Joyce said. “But I put it off. I thought it was the travel to South Carolina twice a month. We were building a home down there and we were busy.”

On May 3, 2014, she couldn’t put it off any longer. She woke up dizzy and one side of her face was drooping. Joyce fell, hit her head on the nightstand and ended up in the hospital, where she was diagnosed with a mini-stroke. As part of her follow-up care, she received a cardiac catheterization, which revealed aortic stenosis—the slow narrowing of the major heart valve over time due to calcium deposits.

Aortic stenosis affects more than six million patients worldwide each year. Once symptoms develop, patients have a high mortality rate, with a 50 percent chance of surviving five years. The only way to change survival is valve replacement, yet, almost 40 percent of patients with aortic stenosis are undergoing “watchful waiting” and not being treated. The most common consequence related to untreated severe aortic stenosis is heart failure and sudden cardiac death. Common symptoms include shortness of breath, dizziness, lightheadedness, and chest pain.

Joyce’s cardiologist recommended Jefferson. “I heard many good things about Jefferson,” Joyce said. She saw Nicholas Ruggiero, II, MD, Director of Structural Heart Disease and Non-Coronary Interventions at Jefferson. “I fell in love with his demeanor right away,” Joyce said. “I knew this is where I wanted to be.”

Dr. Ruggiero told Joyce that the opening of her aortic valve was very small and not enough blood, and therefore oxygen, was getting pumped into her body. “I was feeling so bad physically,” she said.

“I had to do something to feel better.”

Dr. Ruggiero recommended a transcatheter aortic valve replacement (TAVR). Traditional heart valve replacement requires patients to have an open-heart procedure. A TAVR, however, can be completed utilizing very small openings in either the groin or chest — without the need for open heart surgery. The FDA approved TAVR for patients with aortic stenosis who are deemed inoperable, high-risk, and intermediate-risk for standard valve replacement surgery.

“It was like magic,” she said. “I felt better almost immediately. Before the surgery I was gray. I didn’t realize my skin color had changed. Everyone noticed that the color was back in my skin.”

Before surgery, Joyce had to sleep sitting up and experienced shortness of breath during normal activities like showering. Now, she’s sleeping with one pillow, running up and down the stairs, power walking, and getting back to her golf game.