New Hip Gets Mike Back on Track 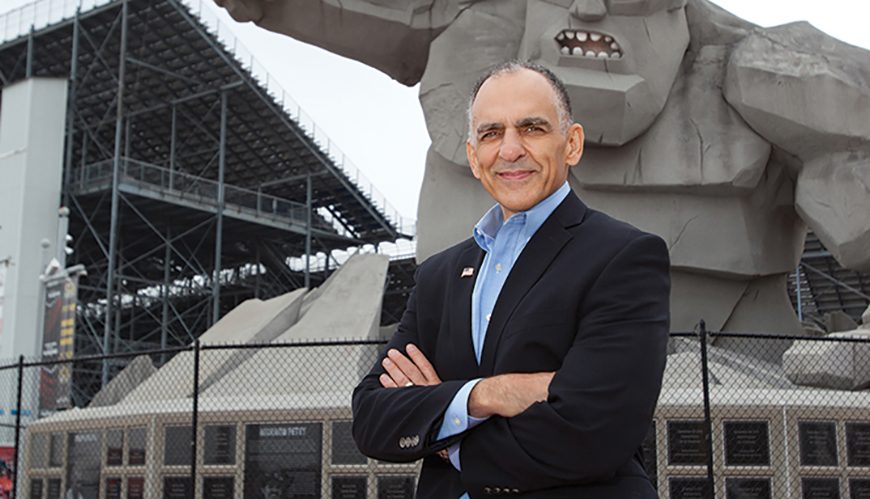 As president and CEO of the Dover International Speedway, Mike Tatoian is always on the move, making sure everything and everyone is in place to give fans a seamless guest experience. So when his right hip began troubling him in early 2013—and started slowing him down—he sought help.

Mike found it in Gregory K. Deirmengian, MD, an orthopaedic surgeon at Rothman Institute at Jefferson Health. Deirmengian diagnosed him with developmental dysplasia of the hip (DDH). In DDH, the ball of the thighbone doesn’t fit into its socket in the pelvis, so it can become dislocated easily, resulting in pain and osteoarthritis, which progressively worsen. Deirmengian told Mike he would need a hip replacement before 60.

Mike could have gotten the surgery at any time, but he was in no hurry. Fit, active, and still in his early 50s, he thought he was too young for hip surgery. He was also concerned about rehab and missed work: “There’s never a good time to get a flat tire.” As the arthritis became more painful over the next few years, he began limiting his activities—no more golf, gardening, or long walks with his wife, Tammy. To prepare for a trip to Europe in April 2016, he stuffed his suitcase with an assortment of ointments, straps, wraps, and medicines.

“Those are the kinds of things you start thinking about more: how am I going to get through it, as opposed to wanting to just enjoy it,” Mike says.

When Tammy reminded him of all the activities he had given up, including those they used to do together, he realized his hip was affecting her as much as him. He was finally ready for surgery.

Deirmengian and his team replaced Mike’s right hip on January 13, 2017. It was a Friday, Mike recalls, but he wasn’t worried about bad luck. Jefferson’s Joint Replacement Program is one of the most prestigious in the nation, performing more than 6,700 surgeries a year. “Obviously, whoever’s doing this—” gesturing to his hip, “has to know what they’re doing. I never doubted this would go well.”

What did surprise Mike, though, was how smooth his hospital stay was. Since he’s in the “people event business,” he notices all the individuals who contribute to good outcomes. At Jefferson, everyone—from the valet to the receptionist to the maintenance staff—got top marks from Mike. “My wife and I both had a great experience,” he says.

At the end of February, while traveling for work, Mike set off the metal detector at the airport. He made sure his pockets were empty, but he set it off again—and then a third time. He was stumped until the security agent asked about hip surgery. “Forty-five days after my surgery, I completely forgot I’ve got this implant, right?” Mike says, “That, to me, is success.”