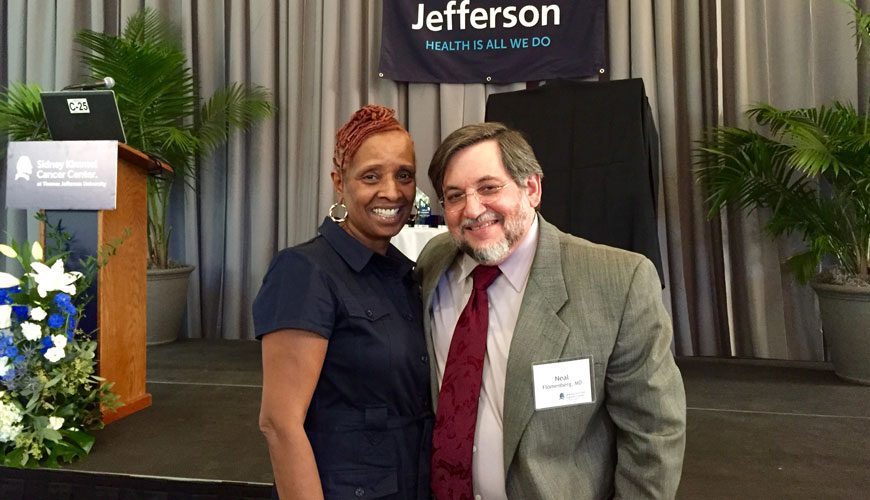 Quinette Keys, 57, has fought and beaten cancer, not once, not twice, but three times.

She first learned that her health had taken a bad turn while she was doing a good deed. As an active service member in the U.S. Army in 1992, Keys attempted to make a blood donation to the Red Cross, a contribution she’d made countless times before. But this time, Keys’ donation was refused. She was advised to see a doctor to find out why.

Keys was initially told that she had a simple case of anemia. It was not until almost a year later that she visited a hematologist and learned that she had been misdiagnosed. The new verdict: Keys had multiple myeloma, a cancer formed by malignant plasma cells that cause mild to severe bone, calcium, and kidney problems.

Chair and Professor of Jefferson’s Department of Medical Oncology, and Clinical Deputy Director of the Sidney Kimmel Cancer Center, Neal Flomenberg, MD, became Keys’ doctor in September 2001. He would later perform a successful stem cell replacement on Keys to address her multiple myeloma.

“When I got to Jefferson they had a team of doctors that were willing to work with me. And even on the floor, all of the nurses, the care and concern that they showed, it was just phenomenal to me,” Keys said.

This is the best hospital I’ve ever been in. I believe if it weren’t for Jefferson, my mother might not be here today.

Kilyon said the transplant was difficult but ultimately successful, as he and his mother both recovered well after the operation.

“This is the best hospital I’ve ever been in. I believe if it weren’t for Jefferson, my mother might not be here today,” Kilyon said.

Keys’ latest health scare came when she was diagnosed with breast cancer in December 2013. She underwent a successful mastectomy at Jefferson in February 2014 and says she’s finally getting back to her normal, active self.