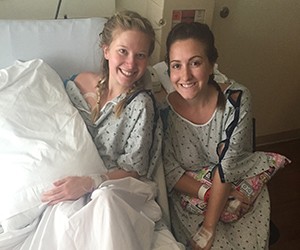 From the moment Breanna Sipple saw a Facebook post about a woman in Philadelphia who needed a kidney, she felt a “special connection.”

That connection eventually led both women into the operating room at the Jefferson Nicoletti Kidney Transplant Center on September 12, 2017. When they emerged, Breanna had given Erin Francis one of her kidneys.

“It was the most selfless thing anyone could do for another person,” Erin says Erin. “She’s my hero.”

Erin’s chronic kidney disease stemmed from a bout with Henoch-Schönlein purpura, a condition that in rare cases can damage the kidneys, when she was four years old. Last year, the doctor who had cared for her throughout her life said that the situation was dire and she needed to get on the transplant list right away.

“I remember feeling like my life was slipping away from me,” recalls Erin, a newlywed at the time. “I thought that, at 24, my life was ending.”

Life became a blur of nightly dialysis and waiting for the call that doctors had found a kidney for her. Concerned that an organ wouldn’t be found in time, her husband, Rich, decided to create the Erin Francis Kidney Donor Page on Facebook. Unbeknownst to Rich and Erin, Breanna—a complete stranger to the couple—read the post and was moved. 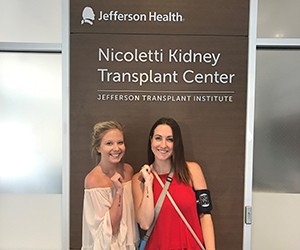 “When I saw Erin’s story, I was overwhelmed. She was my age! I couldn’t imagine being so sick and in need of an organ to save my life,” says Breanna, a 24-year-old designer from Pine Hill, New Jersey. “I just felt like I was supposed to do something.”

She immediately started the testing process to determine if she was a good donor candidate, but didn’t contact Erin, not wanting to get her hopes up in case she wasn’t a match. Along the way, Breanna documented on YouTube her quest to become a donor in order to help people understand how important it is. “A lot of people don’t make it past the point of fear, and I wanted to get the message out that it’s OK to be scared—you can still do it.”

The road to September 12 was an emotional roller coaster for both women. At first, it appeared that Breanna was a match and could be a living donor, however at the end of six months of testing, a small glitch caused Erin’s hospital to reject Breanna for the transplant. That is when a friend told Erin about Breanna’s efforts; she found the videos—and watched in amazement.

“I couldn’t believe it,” Erin says. “She cared so much, and she didn’t even know me!” A few days later, Erin reached out to Breanna. At the urging of Erin’s mother, who had heard of Jefferson’s reputation for successful kidney transplants, the two decided to continue their journey together at the Jefferson Nicoletti Kidney Transplant Center. 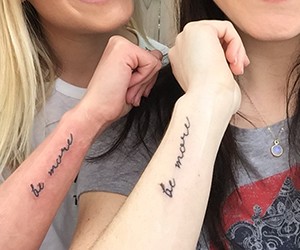 “I loved Jefferson from the moment I stepped into the building. The team is so caring—they don’t look at you as a case, they look at you as people,” says Erin. Breanna adds, “At Jefferson, we felt cared for; everyone there was interested in our comfort and our well-being.”

After extensive testing, the transplant team said the surgery was a “go.” Then, a week before the scheduled date, doctors determined Erin’s strengthening antibodies increased the risk of rejection. The surgery was postponed until the team and the women could discuss the risk and ways of managing it. A treatment to lower Erin’s antibodies worked, and the operation was rescheduled for the following week.

At the end of the three-hour surgery, Breanna had given Erin a second chance at the life she had always imagined—a life without dialysis, a life in which she could plan a future with her husband.

Today, the two share a forever friendship, a positive outlook on life, a tattoo on their arms that says “Be More,” and a mission: to bring awareness to organ donation and inspire others to get past that “point of fear.”