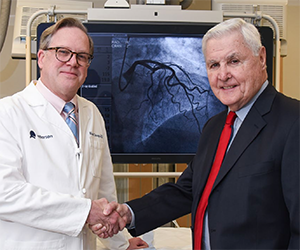 In the spring of 2004, Victor Skowronski was busy going about life as a public relations executive for the Comcast Corporation, where he worked closely with the company’s co-founder, Ralph J. Roberts. Life was good for the 60-year-old Fishtown native– he enjoyed his work with the largest cable television company in the country, a position that kept him closely tied to his Philly roots.

But that spring found him uncharacteristically fatigued and frequently short of breath – even during short walks or jaunts up a flight of stairs. His wife, Gloria, finally convinced him to get it checked out.

“I went and got a stress test and I flunked it miserably,” Skowronski recalls. “The attending physician said you’re going to have to find out what’s going on—obviously you have blockages.”

A diagnostic catheterization revealed three blockages—one as much as 90 percent. A few days later, Victor was prepped for an angioplasty procedure at his local community hospital that he thankfully thought would solve the problem. At the last minute, however, the head cardiologist concluded that one of the blockages was situated in such a way that a stent may cause a catastrophic event. Instead of angioplasty, he was now recommending triple bypass surgery.

“My chin dropped and my wife and I were in shock,” Victor says. “They began to explain how it’s done and I said, ‘look, don’t tell me anymore. Just schedule me, do it and get it over with.’”

Returning to his South Jersey home, Victor called Ralph Roberts at Comcast to explain that he was scheduled for bypass surgery and would have to miss several weeks of work. Roberts recommended a second opinion. “I want you to see my cardiologist, Dr. Bernie Segal at Jefferson,” Victor recalls Roberts saying. “As a matter of fact I’ll have him call you.”

Dr. Segal called that night, suggesting Victor have his medical files sent to his office. “Tell them to postpone the surgery until I’ve had a chance to look at everything.”

It wasn’t long before Victor received a call from Michael Savage, MD, director of the Jefferson Angioplasty Center and the Jefferson Cardiac Catheterization Lab. Victor could go ahead and have the triple bypass surgery, Dr. Savage said, or he could come to Jefferson, where he felt confident that he could solve the problem by inserting three stents – a much more minimally invasive procedure.

Within a week, Dr. Savage had inserted all three stents. Victor has been fine ever since. “I went home and resumed my normal life,” Victor says. “The next day I was fine. It was like nothing ever happened. Dr. Savage...God bless him. He saved me from triple bypass and possibly, he’s the reason I’m here today. Back then, bypass surgery, there was no guarantee.”

Today, doctor and patient continue to see each other every six months or so and have even developed a friendship. Dr. Savage believes Victor is in many ways the ideal patient for the Jefferson Angioplasty Center, citing the Center’s mission of offering less invasive options for patients who have been told they need open heart surgery.

Their bond took on new meaning in July, 2013, when Dr. Savage was named the Ralph J. Roberts Professor of Cardiology. The endowed professorship was made possible through generous donations from the families of Lawrence S. Smith and John R. Alchin, former Co-Chief Financial Officers of Comcast Corporation. The joint gift from Mr. Smith, his wife, Christine, Mr. Alchin and his partner C. Halford Marryatt was inspired by the leadership and philanthropy of their friend and mentor, Ralph J. Roberts, who became a longtime patient of Dr. Savage. At the ceremony announcing the professorship, Victor took a photo of Dr. Savage and Mr. Roberts together, which Dr. Savage has framed on his desk. The Roberts’ family generosity has helped promote the groundbreaking research of the Jefferson Angioplasty Center thanks to donations from The Aileen K. and Brian L. Roberts Foundation and The Suzanne F. and Ralph J. Roberts Foundation, Victor, who will turn 75 in May, was recently asked to return to Comcast to work on a full-time basis. Though he retired in 2006, he continues to work for the company as a consultant. When Comcast decided it was time for someone to capture the company’s history in book form, Victor Skowronski was the right man for the job.

“I’m a fortunate man, God’s been good to me,” Victor says. “It’s really a miracle. I’m here today because of Ralph Roberts and Dr. Savage.”