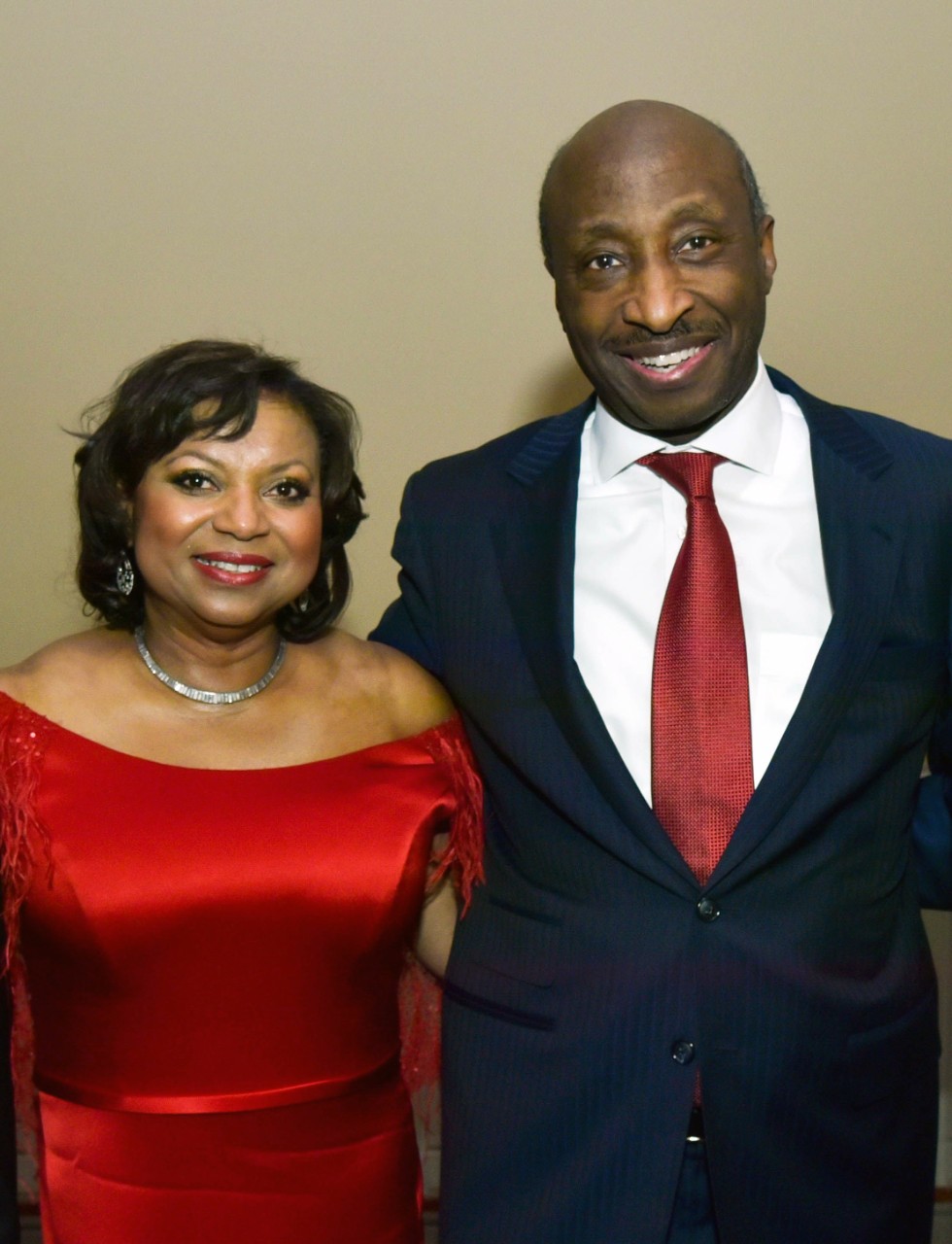 PHILADELPHIA [AUG. 31, 2020]– Thomas Jefferson University and Temple University today announced a joint partnership to bring life-saving stroke prevention and care to Philadelphia’s most underserved communities. The collaboration is made possible by a $5 million gift to Jefferson from Andréa and Ken Frazier.

The Frazier Family Coalition for Stroke Education and Prevention establishes a partnership between two of the state’s premier universities and health systems to address social determinants of health and race-ethnic disparities that lead to poor health and increased risk of stroke for residents of North Philadelphia. The initiative will focus specifically on the neighborhoods surrounding 18th and York streets, sometimes referred to as Allegheny West, which ranked nearly last among Philadelphia neighborhoods for health outcomes.

“Thanks to the Fraziers’ generosity, we’re assembling a coalition of public and population health experts to devise a strategy focused on prevention and education to reduce stroke risk in these communities,” says Robert H. Rosenwasser, MD, MBA, President, Vickie and Jack Farber Institute for Neuroscience–Jefferson Health and the Jewell L. Osterholm, MD, Professor and Chair of the Department of Neurological Surgery at Jefferson’s Sidney Kimmel Medical College.

Stroke is the fourth-highest cause of death in Philadelphia. Due to a range of factors—including lack of accessibility to healthcare providers, unmanaged chronic disease, and lack of awareness of risk factors—the rate of stroke is highest among underserved African American community members. Research has shown nearly 80% of strokes are preventable. In Philadelphia, the stroke rate is 20 times the national average; approximately 60,000 of the 785,000 cases of stroke reported annually happen in the city.

The objective of the Frazier Coalition is to create a wholly-integrated health education and community navigation program that connects at-risk community members with the information, resources, and clinical care they need to prevent stroke, as well as to connect patients who have had a stroke with the services they need to prevent a reoccurrence.

“It is critical that our health systems address the disparities that impact underserved communities. Stroke disproportionately affects disadvantaged African American community members, and combined with poor access to education and healthcare, results in significantly poorer health outcomes,” Andréa and Ken Frazier said in a joint statement. “Our family has deep roots in North Philadelphia and has been impacted by the debilitating effects of stroke. We feel privileged to be in a position to help convene this partnership to bring life-saving stroke prevention measures to our community.”

The partnership will leverage the strength and expertise of the Vickie and Jack Farber Institute for Neuroscience at Jefferson, the Jefferson Center for Urban Health and the Lewis Katz School of Medicine at Temple.

“Providing high quality health care to this region’s underserved communities has been a hallmark of Temple University for more than a century. Andréa and Ken Frazier’s gift allows Temple and Jefferson to extend our reach and expand the care options to prevent and care for those dealing with strokes,” says Richard M. Englert, president of Temple University. “I want to thank Andréa and Ken for their generosity and their continuing concern for improving health care options in this region.”

Reversing health disparities in Philadelphia is a cornerstone of Jefferson’s Reimagine $1 billion campaign. Focused on four key themes, the campaign aims to support talented faculty and students, create spaces that heal and inspire, unite communities for health equity, and fuel discoveries that will improve lives.

“Andréa and Ken Frazier have enabled Jefferson and Temple to marshal our collective resources to partner with the people and organizations near Ken’s childhood neighborhood and empower members of the community to live fulfilling, healthy, and productive lives,” said Stephen K. Klasko, MD, MBA, President of Thomas Jefferson University and CEO of Jefferson Health. “This gift signals a tipping point, a catalyst to turn the tide toward a better future, and to end disparities in health outcomes between communities in Philadelphia.”

Andréa W. Frazier founded Frazier Designs, an interior design firm and drapery workroom, where she designed residential and commercial projects. Prior to that, she served as a senior consultant for Cigna, where she developed and managed undergraduate and MBA recruitment programs. She was also the director of recruitment programs and placement at New York University School of Law. She most recently taught international law and politics as an adjunct professor at St. Joseph’s University.

Andréa has served on multiple boards, including the Vickie and Jack Farber Institute for Neuroscience – Jefferson Health, the Ellis Marsalis Center for Music advisory board, the American Heart Association Go Red for Women’s Circle of Red society, the Hun School of Princeton parent executive board, and the Stuart Country Day School parent-teacher organization. Her professional affiliations include the American Society of Interior Designers, Children’s Hospital of Philadelphia, and Cornerstone Christian Academy. Andréa earned a bachelor’s degree from Tufts University and a master’s degree from the Graduate Center of City University of New York.

As a stroke and cancer survivor, Andréa is passionate about raising awareness and improving health outcomes for women and underserved communities. She currently resides in Bucks

County, Pennsylvania, with her husband, Ken. She is the proud mother of her daughter, Lauren, and her son, James.

Kenneth C. Frazier has served as the Chairman of the Board and Chief Executive Officer of Merck & Co., Inc. since 2011. Under Ken’s leadership, Merck is delivering innovative lifesaving medicines and vaccines, as well as long-term and sustainable value to its multiple stakeholders. He has substantially increased Merck’s investment in research, including early research, while refocusing the organization on the launch and growth of key products that provide benefit to society. He has also led the formation of philanthropic and other initiatives that build on Merck’s more than 125-year legacy.

Ken joined Merck & Co., Inc. in 1992 and has held positions of increasing responsibility including General Counsel and President. Prior to joining Merck, he was a partner with the Philadelphia law firm of Drinker Biddle & Reath. Ken’s contributions, especially in the legal, business, and humanitarian fields, have been widely recognized. He sits on the boards of PhRMA, Weill Cornell Medicine, Exxon Mobil Corporation, and Cornerstone Christian Academy in Philadelphia. He also is a member of the American Academy of Arts and Sciences, the American Philosophical Society, The Business Council, the Council of the American Law Institute, and the American Bar Association. Additionally, Ken is co-chair of the Legal Services Corporation’s Leaders Council. Ken received his bachelor’s degree from The Pennsylvania State University and holds a J.D. from Harvard Law School.

Thomas Jefferson University is a leader in interdisciplinary, professional education. Jefferson, home of the Sidney Kimmel Medical College and the Kanbar College of Design, Engineering and Commerce, is a preeminent university delivering high-impact education in 160 undergraduate and graduate programs to 8,400 students in architecture, business, design, engineering, fashion and textiles, health, science and, social science. The new Jefferson is re-defining the higher education value proposition with an approach that is collaborative and active; increasingly global; integrated with industry; focused on research across disciplines to foster innovation and discovery; and technology-enhanced. Student-athletes compete as the Jefferson Rams in the NCAA Division II Central Atlantic Collegiate Conference.

Temple University is a center of excellence in teaching and research, with an international presence and a commitment to community. Our talented faculty lead more than 500 academic programs across 17 schools and colleges, and on campuses and with partnerships around the world. Though the university especially serves students from Greater Philadelphia, Temple is home to more than 38,000 dynamic and diverse students, creating an atmosphere within which students can learn and grow beyond academics. Temple is Philadelphia’s public university and is among the nation’s largest educators in the combined fields of dentistry, law, medicine, pharmacy, and podiatry.